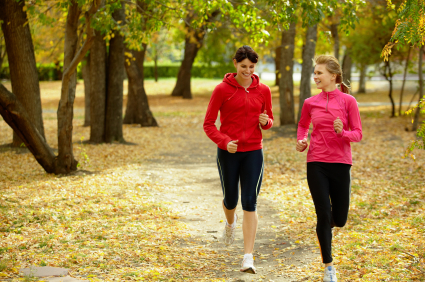 Parks of San Francisco for Running

Running is a terrific activity for people who are visiting San Francisco despite the fact that the notorious hills of the city can intimidate even the most experienced of runners. A run through the city provides you with great scenic views, a chance to enjoy the weather and a lot of opportunities to see interesting things within the urban area. Many San Francisco hotels are located within close proximity to some of the best runs in the city.

Benefits of Running in San Francisco

Some of the reasons that you might want to hit the pavement and go for a jog while you’re in San Francisco include: 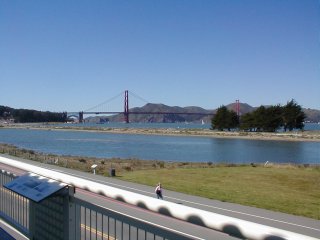 Crissy Field is one of the leading places where San Francisco residents regularly go for a run. There is an established running route here that starts as far as east as Fort Mason and travels West along the waters of the bay. The most common path to take is to head past Fort Point right to the bottom of the Golden Gate Bridge. When you get there you will see a pair of concrete hands that runners slap to celebrate the achievement of their run. You can do this yourself and then you can turn around and run back to your starting point. If you do the full run to and from Fort Mason you’re looking at about five miles but you can start anywhere on the path for a shorter run.

If you’re really bold as a runner you can extend your trip all the way across the Golden Gate Bridge, another one and a half miles, to see the city skyline from the North Bay. There is a walking path along the bridge that you can run on although since it’s always filled with tourists you may find yourself slowed down during most times of the day.

This run is most convenient for people staying at the affordable hotels on and near Lombard Street. 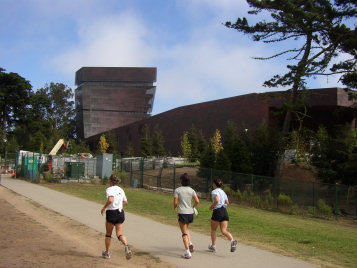 Golden Gate Park is a huge city park that offers a lot of different things for visitors to see. It also offers several dirt running paths. For example, there is a dirt trail that starts just south of Fulton and takes you all the way along the park to the Great Highway on the edge of the Pacific Ocean. If you do a Google Maps search of the park itself, you will see several lines on the park that look like small roads; these are actually the dirt trails.

This run is most convenient for people staying at hotels on Haight Street or near the coast.

People who are seeking out a run that will take them through nature along the Pacific Coast need look no further than the popular Land’s End Trail. This is a dirt trail through a woodland area along the ocean. There are multiple trails throughout this area so you can pick a short run or a longer one. A great option is to start at the Eagle’s Point Trailhead located at 32nd and California and to proceed along the trail all the way to the Cliff House. During your run pay attention to what you see in the water; if the tides are low enough you can see remnants of old shipwrecks below!

This run is convenient for the people who are staying on Lombard Street near the Presidio as well as for people staying near Golden Gate Park. See the hotels listed in the above two runs for specific recommendations in this area. 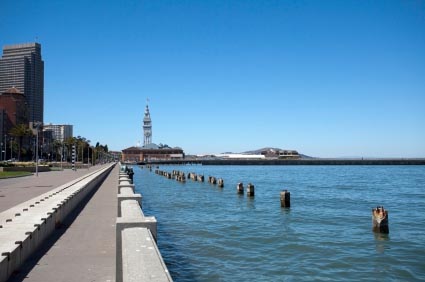 Recommended Run #4: Along the Embarcadero

Many San Francisco visitors would love to check out these nature-based trails but just don’t have the time to go for a long run on the outer edges of the city. That’s okay; there’s another great option located in close proximity to Fisherman’s Wharf as well as the Financial District. It’s the Embarcadero, the sidewalk area that runs along the bay from AT&T Park to Fisherman’s Wharf. The one drawback to this run is that this is a high-traffic area so sometimes the crowds will slow you down. However, it’s popular with local runners so most people know to move to the side and let you pass.

This run is most convenient for people staying along the Embarcadero including both those in the Fisherman’s Wharf hotels and those at the other end in the Financial District hotels.

Huntington Park is a small park located in the heart of San Francisco at the intersection of Taylor and California. You’ll get a great warm up climbing up the steep hill to get to this park! Then you can enjoy a nice leisurely jog around the perimeter of the park. Alternatively you can extend your run to the urban areas around the park, taking various hills up and down to challenge yourself. The park itself is quiet but family friendly as well as pet friendly.

This run is most convenient for people staying at hotels around Union Square and Nob Hill. Find upcoming races and runs around San Francisco at RunGuides.