The Golden Gate Bridge is the most iconic landmark in San Francisco. It is featured in numerous photos, posters and postcards of the city. Walking or biking across the bridge is part of the San Francisco experience. And even if you don’t get the chance to cross the bridge, you’ll certainly see it during your other activities in the city.

Where to See the Best Views of the Bridge

Not every traveler will get the chance to go over the Golden Gate Bridge but you’ll still be able to see this landmark while you’re in the city. Here are some of the best spots to keep your eye out for a terrific view of the bridge. 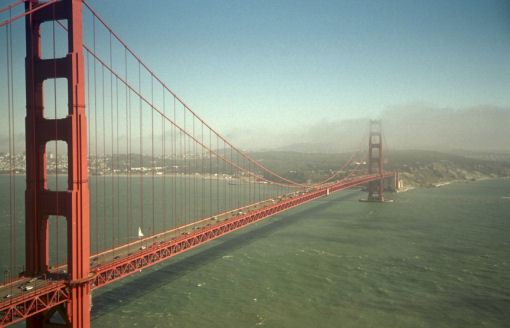 How to Get to the Golden Gate Bridge What To Do at the Golden Gate Bridge

Other Activities Close to the Golden Gate Bridge When the Golden Gate Bridge was first built in 1937 it was the longest suspension bridge ever built in the world. It immediately became internationally recognized and still remains a globally known symbol of San Francisco to this day. It is currently the second longest suspension bridge in the United States and the ninth longest in the world. Many people say that even though it’s not the longest anymore, it’s still the most beautiful!

Construction of the bridge was clearly a big deal. Many people said that there was no way that the bridge could be created. Not only would it have to be longer than any other suspension bridge of that time but it was in an area with strong wind currents and water tides. The Department of War worried that the bridge would interfere with ship traffic in the area. There were a lot of design issues to deal with and a lot of red tape to get through. Eventually, construction did start in 1933 and took over four years to complete at a cost of slightly more than $30 million.

San Francisco has always loved to celebrate everything. When the bridge finally opened, there was a week-long celebration. 200,000 people crossed the bridge together on foot and rollerskates before cars were allowed to cross. Celebrations continued in the city for several weeks following this event.

The bridge was built because it was necessary to create a transportation link between then North Bay and the city. At the time, the only way to get between the two areas was by ferry. Although it’s still possible to ferry between the areas today, most people find it more practical to travel across the bridge. Before the bridge was built, San Francisco’s national growth rate was smaller than average because it was just too inconvenient to get in and out of the city. The bridge succeeded in helping to grow the city. It also became a symbol that defines the city.

Many people want to know why the bridge is red. Well technically it’s not red, it’s a color of orange vermillion called International Orange. This color was selected because one of the original architects felt like it was the color that best enhanced the visibility of the bridge in the fog and yet still complemented the natural surroundings of the area.