You can get a free, printable, detailed map of the San Francisco 49 Mile Drive right here for your trip. We also offer a new “favorite spots” map of San Francisco’s downtown core.

This drive introduces you to large swaths of San Francisco’s history while allowing you to enjoy some great scenic views and hit up the highlights of the city. And even if you do have more time to spend in the city (or even if you live there) it’s worth it to take the drive at least once to see all that San Francisco is known for, discovering a few of the gems that people sometimes miss like Mission Dolores. History of the 49-Mile Scenic Drive

One of the major highlights in San Francisco’s history was the Golden Gate International Exposition held at Treasure Island in 1939 to celebrate the building of both the Bay Bridge and the Golden Gate Bridge, which had each only recently been completed at the time. One of the key features of this expo was the launch of the 49-Mile scenic drive, which showed off both of the bridges and ended at the Treasure Island fairgrounds. The current route takes you through large regions of the city and does allow views of both bridges but no longer goes all the way to Treasure Island.

How to Tell if You’re on the Scenic Drive

You can download a (free, printable) up-to-date version of the San Francisco 49 Mile Drive Map to follow the whole drive.  However, even if you don’t intend it, you will sometimes find yourself on this drive when you’re in the city without even realizing it. You can tell that you’re on it because the attractions along the drive are marked with blue and white signs that tell you you’re on 49 Mile Scenic Drive. The signs have a seagull featured on the top left corner. For your hotel stay, we also offer a free map of San Francisco’s downtown area and central neighborhoods.

These signs themselves are part of the history of the scenic drive. They were designed by an artist who won a competition held by San Francisco’s Downtown Association in 1955 and have marked the scenic drive ever since. One important thing for you to note if you’re taking this drive intentionally, however, is that the signs are often stolen and it takes awhile to replace them so you’ll want the map with you in addition to following the signage! Attractions Worth Enjoying from the Car

You can get a free, printable, detailed map of the San Francisco 49 Mile Drive right here for your trip.

The point of a scenic drive is that you get to see a lot of things from the comfortable seat of your car. Some of the key attractions on the drive that can easily be enjoyed without getting out of the car include: Here are some of the attractions that the 49-Mile scenic drive will take you past but which may be worth getting out of the car and exploring in more depth: What to Expect from the Drive

The 49-Mile scenic drive is a great experience and a terrific way to see a lot of what the city has to offer. However, you should know what you’re getting into before you tackle the task of doing the entire drive. According to an article on the history of the drive, a few of the annoyances you may encounter during the drive include:

If you do the drive from start to finish with just a few stops at the major attractions it should take you three to four hours to complete the drive. Alternatives include taking a tour bus that goes along most of the route or renting a bicycle and doing it on bike, which takes approximately six hours but eliminates some of the difficulties of having to drive in the city. 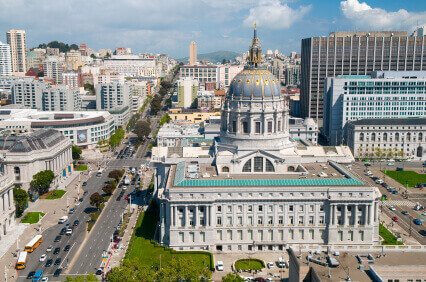 The great thing about this drive is that it takes you through so much of the city that nearly any hotel you’re staying in within city limits is going to be close to a portion of the drive. However, if you are planning to start and finish the drive at the traditional spot, near San Francisco City Hall, then you’ll want to get a hotel close to that point. Some of the best hotels near San Francisco City Hall include Hotel Whitcomb, Renoir Hotel, and the Hayes Valley Inn.

If you’d like to see jpg images of the 49 mile scenic drive map, you can find the downtown San Francisco route map, overview, and places to see at these links.