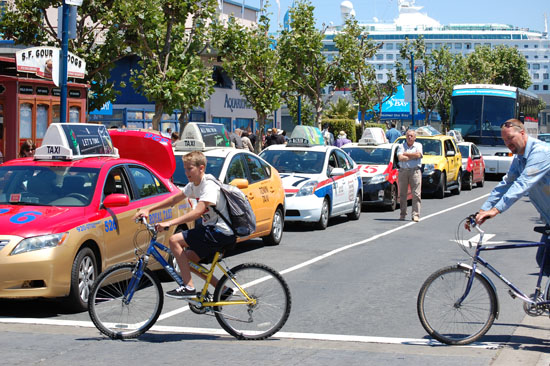 San Francisco, California is one of America’s favorite vacation spots. It is also one tough place to park a car. Making your way around the city can be especially challenging for visitors because of the steep hills and attractions scattered in every area. Instead of spending $50 or more per day on a rental car – and easily that much per day parking just at your hotel – a taxi is a great alternative for visitors and locals who want to make life a lot easier.

While there are dozens of taxi and hired car services in and around San Francisco, you will want to choose carefully. One thing is repeated by passengers of all ages, service is rarely speedy. In fact, most find that after calling for taxi service it takes about thirty minutes for that taxi to arrive. Certain companies are far quicker than others. If you call in advance of your planned departure, you won’t be bothered by the wait. It is the people who call as they leave a popular restaurant who find themselves annoyed as they wait on the sidewalks. Your advanced planning can help avoid standing outside for lengthy periods.

San Francisco is a small big city. Seven miles by seven miles is not much compared to other major U.S. destinations. In fact, if you are visiting the city by the Bay you will in all likelihood be enjoying the sites and stimulus of the northern half, which includes the picture postcard sites, Chinatown and Haight-Ashbury. However, despite the small geography getting around San Francisco is not easy. Public transit consists of the notorious MUNI which every incoming mayor has atop of the campaign promises to improve. The underground goes up two streets and the buses are late and packed. Renting a car is not the worst idea, but it isn’t easy when one way streets sneak up on you and as for parking, there is next to none. San Francisco is a great walking town but best for those who include a little cardiovascular routine in their daily lives back home. The hills of SF are both ubiquitous are murderous on the unsuspecting traveler. Nevertheless, like all cities with roads there is the option of the San Francisco taxi cab which British comedian Eddie Izzard commented, “To which there are five!” 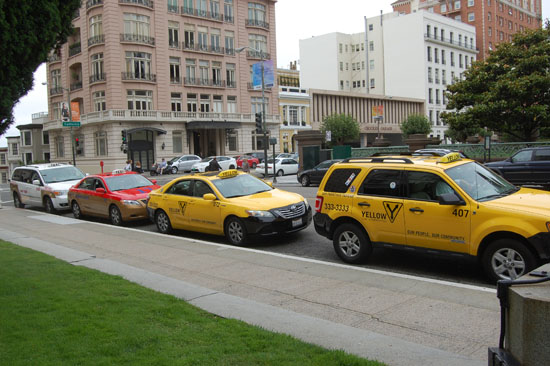 San Francisco Taxis at the Top of Nob Hill

Taxi service is one of the most convenient forms of transportation in San Francisco — not luxurious by any means, but surprisingly low in cost for infrequent or visitor use. You simply call the dispatcher for a ride or wait in high traffic areas and attempt to flag a taxi down from the street. It’s an easier task if you are in a high traffic area such as Fisherman’s Wharf or Union Square, but it can be advisable to call in advance to avoid long wait times.

Regardless of what cab company you select, rates are set for all companies by the San Francisco Municipal Transportation Agency (SFMTA). These taxi rates are verified as of Summer 2009 : 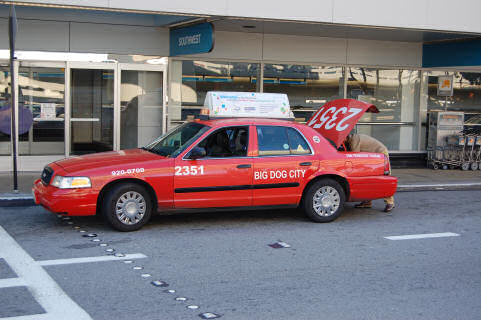 Taxis are popular from SFO airport.

For trips over 15 miles, taxi companies charge an additional 50 percent of the cab fare. For example, if your fare comes to $100, you will pay $150. You are also responsible for any bridge or highway tolls.

San Francisco does not allow taxi companies to charge you an additional baggage fee, so no driver should attempt this. Also, drivers cannot refuse you if you plan to only go a short distance, such as a block or two. If there is a fare dispute, drivers legally have to take the passenger to the nearest police station so that police can help resolve the issue. 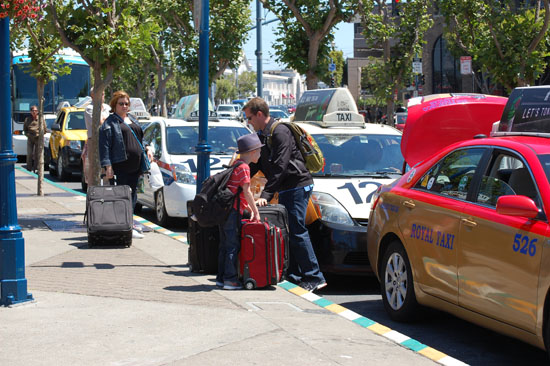 Calling a taxi in advance can avoid a wait.

here are more companies out there; the list changes frequently. What are listed above are companies that people have agreed to share their experiences. The City of San Francisco offers a complete list, including contact information, with notes when a taxi company’s business license has been revoked.

Taxis in San Francisco are easy to spot lined up outside the airport and large hotels, so if you are staying at one you are in luck. However, finding one driving on the street is not impossible but hailing one down that is unoccupied can be an exercise in futility. Plan ahead because getting into a cab is half the battle. The best thing you can do, and this always applies, is to know where you are and know where you are staying and get a sense of looking at what is in between. Street maps are pocket sized for your convenience and it’s a good tool to have in SF. Why? Because many a taxi driver in San Francisco does not know their fair city that well. This is can be hard on the pocketbook. Those familiar with the streets of San Francisco find that cabs are not too fond of the shortest distance between two points standard of a straight line. The longer you are in the cab the more money they make. The more sober you are the better chance you have of paying less.

The taxi experience in San Francisco is also special because unless the cab driver actually owns the cab he or she is driving, they can take you on a roller coaster ride with no safety precautions. Ask any city driver and they will tell you the most dangerous person behind the wheel is a cab driver. Zooming up and down the hills can be hard on the crown and the butt. Put your belt on as soon as you get in because stop signs look like big green lights to these guys. Also, just to make it even more comfortable for you it is likely you will experience the fragrance Eau du Marlboro when you enter a cab. This is the case for owned or company cabs. Typically you won’t have a driver smoking while you are in the cab but you know he is going to be puffing when you step out.

Limousines and hired cars are luxurious and offer plenty of room to spread out. It goes without saying that often this option is more costly than others, but if privacy is a concern, you cannot beat hiring a car or limo. 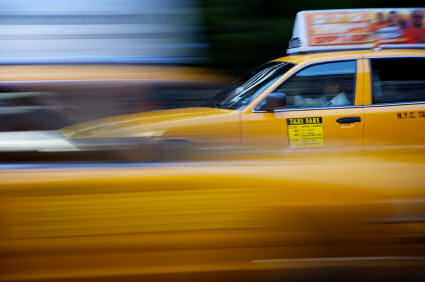 Shuttle van service is a nice alternate to a taxi. You share the van with others heading to the same airport or you can reserve the entire van to yourself. More spacious than a taxi, extra baggage is generally not a problem.